How I came up with care-squared 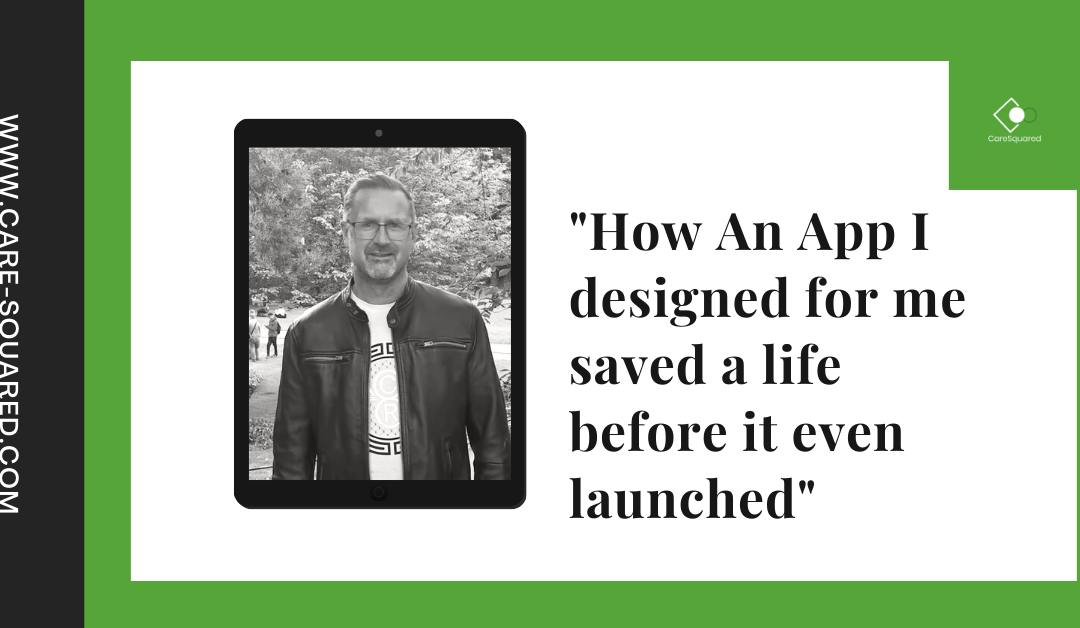 How Caresquared, an App created for carer’s saved a life while still in testing.

I ask him “How can you not know your own daughter are you winding us up?”

He seems confused by the question & says:

“Of course I know who she is she’s my daughter”. His daughter didn’t notice but she has felt that knife to the heart many times since when he doesn’t recognise her.

I thought little of it myself but that was the first sign of a long decline & a battle with a relentless disease that strikes one person every 3 seconds,

Fast forward 10 years, he’s now consistently confused, has wild mood swings  eats like a chicken  unless it’s sweet & then he eats like ant  let his previous cleanliness routine lapse. Wanders off to the shops where he’s a local celebrity, but struggles to make it there & back because his legs have been affected my mini stroke. He Repeats himself over & over & calls myself or his daughter up to 75 times a day.  (The record) Has periods of incontinence & suffered several urinary infections leaving him seriously ill. Each small strokes made his vascular dementia & Alzheimer’s worse He’s had a heart attack, talks to strangers in the street & on the phone like they’re best friends. Consistently complains he’s bored & nobody visits minutes after you’ve left. Can never find his lotto tickets & confuses it with the old football pools, so from 5.30 pm about 3 hours early, he’s calling asking for the results He refuses medication so has to think it’s vitamins & refuses to admit he is unwell.

“I’ve taken care of myself for 50 years, there’s nothing wrong with me…” is his battle cry

Being a curious person, I wanted to see who else this impacted, I became a student of dementia.

So I studied everything I could find that might help me personally, yet the strange thing is, the more I searched for specifics to me the more I uncovered I wasn’t the only one. There are a forgotten army of carers just like me. Each one fighting an individual battle in a shared war. One thing that quickly becomes obvious when you do the maths is when you’re at your wits end, overwhelmed & on the edge of despair, overwhelmed with the routine demands & also the surprise ones & you think you’re the only one going through this & you’re crying “why him, why me” you are not alone it’s a well trodden path

It’s not bad all the time, there are times he becomes himself, it’s a cruel glimpse into the past you remember before its gone again. You learn to appreciate the small things.

Self depreciating humour “ bloody hell my memories got bad” said with a chuckle.

All glimpses into the person we miss most of the time.

I got Covid during the first wave & he was feeling more isolated & abandoned, I struggled to order him a food delivery & take his calls as I fought against the virus which at that time had no vaccine.

When I finally recovered & left isolation, I was so frustrated I decided to do something to make this easier on me,l so I got to thinking

“What does he really need? And what do I need to still allow me some kind of work life balance”

What immediately sprung to mind were the most practical things.

Then I thought “what do I want in an ideal world?”

My first real test came when the paid care & his daughter called me in blind panic.

“What are we going to do dad’s gone missing he’s been gone since 10 am” the time the carer discovered he wasn’t home. It was more than 5 hours later the alarm was raised. “Will dad be alright that man wondered off from Shirebrook the other day, they organised a search party through Facebook & they found him in Essex two days later. We’ll find him won’t we?”

I could sense the panic & it was then I remembered i’d downloaded an APK of my app onto his phone to test it. & I pulled out my phone & within 5 minutes I knew exactly where he was & we went to pick him up. He was borderline hypothermic, having gone out in a thin t-shirt & jeans but he was home & he was alive

That experience, the Shirebrook incident & the volume of missing vulnerables be being reported on a daily basis in the local news, convinced me that i could really help to do something positive for not just me but other carers to keep their loved ones safe.

That’s not my location but it is my app.

But that’s not all.

To figure out if Caresquared can help you (apart from having a great product) you’re going to have to try it for free.

I considered all carers in developing this app so you can use it to give you time & money back & one of the things I learned is carers are desperate for a break any time to themselves even 15-20 minutes of respite. I think I’ve given you that it’s like care squared ( see what I did there?)

[Tip #1] Help me improve the app with your suggestions

When it comes to caring for dementia , I know what you’re suffering because I’ve lived it & myself & my developer are using the app & it’s doing everything I hoped it would.

And now that I’ve lifted back the curtain and shown you how to do the same, it’s time for you to test it out yourself.

Here are the 5 key takeaways:

P.S. If you love the app or you hate it please let me know personally, I’d value your feedback & if you leave your phone number I’d love to speak to all of you individually.

P.P.S. Dementia needs routine. When dementia is end stage it’s too late to use our app with your loved one. Therefore we encourage our users to use the caresquared app with your vulnerables before formal diagnosis and if the worse should occur your loved one will already have that routine of using the Caresquared app that will allow them to stay independent for longer.

No comments to show.